About two weeks ago I was on the annual openSUSE Board face to face meeting. It was great and you can read reports of what was going on in there on openSUSE project mailing list. In this post I would like to focus on my other agenda I had while coming to Nuremberg. Nuremberg is among other things SUSE HQ and therefore there is a high concentration of skilled engineers and I wanted to take an advantage of that…

Little bit of my personal history. I recently join Turris team at CZ.NIC, partly because Omnia is so cool and I wanted to help to make it happen. And being long term openSUSE contributor I really wanted to see some way how to help both projects. I discussed it with my bosses at CZ.NIC and got in contact with Andreas Färber who you might know as one of the guys playing with ARMs within openSUSE project. The result was that I got an approval to bring Omnia prototype during the weekend to him and let him play with it.

My point was to give him a head start, so when Omnias will start shipping, there will be already some research done and maybe even howto for openSUSE so you could replace OpenWRT with openSUSE if you wanted. On the other hand, we will also get some preliminary feedback we can still try to incorporate. 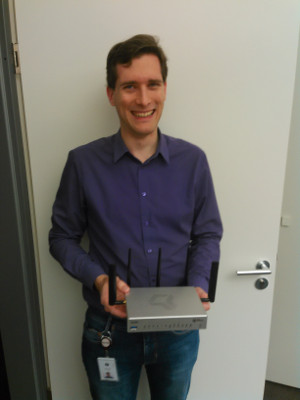 Why testing whether you can install openSUSE on Omnia? And do you want to do that? As a typical end user probably not. Here are few arguments that speaks against it. OpenWRT is great for routers – it has nice interface and anything you want to do regarding the network setup is really easy to do. You are able to setup even complicated network using simple web UI. Apart from that, by throwing away OpenWRT you would throw away quite some of the perks of Omnia – like parental control or mobile application. You might think that it is worth it to sacrifice those to get full-fledged server OS you are familiar with and where you can install everything in non-stripped down version. Actually, you don’t have to sacrifice anything – OpenWRT in Omnia will support LXC, so you can install your OS of choice inside LXC container and have both – easily manageable router with all the bells and whistles and also virtual server with very little overhead doing complicated stuff. Or even two or three of them. So most probably, you want to keep OpenWRT and install openSUSE or some other Linux distribution inside a container.

But if you still do want to replace OpenWRT, can you? And how difficult would it be? Long story short, the answer is yes. Andreas was able to get openSUSE running on Omnia and even wrote instructions how to do that! One little comment, Turris Omnia is still under heavy development. What Andreas played with was one of the prototypes we have. Software is still being worked on and even hardware is being polished a little bit from time to time. But still, HW will not change drastically and therefor howto probably wouldn’t change as well. It is nice to see that it is possible and quite easy to install your average Linux distribution.

Why is having this option so important given all the arguments I stated against doing so? Because of freedom. I consider it great advantage when buying a piece of hardware knowing that I can do whatever I want with it and I’m not locked in and depending on the vendor with everything. Being able to install openSUSE on Omnia basically proves that Omnia is really open and even in the unlikely situation in which hell freezes over and CZ.NIC will disappear or turn evil, you will still be able to install latest kernel 66.6 and continue to do whatever you want with your router.

This post was originally posted on CZ.NIC blog, re-posted here to make it available on Planet openSUSE.