Recently I decided that my family needs walkie-talkies. My daughter started riding a bike and I needed to stay in contact with her when she ventures too far. Ideally without shouting my lungs out. For my use case I don’t need really big range, I need something cheap that works and supports some kind of filtering so we wouldn’t be disturbed by people using the same frequency. For the future use, VOX functionality and headset would be a plus.

I started searching for something cheap that I can buy and for the best thing I can buy cheap. After a little research, I found Baofeng BF-888S. It is cheap, programmable, supports various functions that I want/need. And has 5W of transmitting power, so it could reach quite far. It was my number one choice till I did more research. Then I found out, that setting it up to be legal would be really tricky. What my research showed is that the common way to setup walkie-talkies in EU is something called PMR. And all radios using it should adhere to some limitations. Non-removable antenna and 0.5W power output. BF-888S has replaceable antenna and peak output 5W. It has some option to limit the output, but it was hard to find what is the result. There are also other channels that should be free to use, but I found researching the conditions how to safely use them hard. So I decided to play it safe and pick different radio. BF-T1. It is smaller, unfortunately not much cheaper, but has just 1W output and can be reduced to 0.5W. Has non-removable antenna and the channels are programmable. And in my case, it also came with a headset.

First thing first, let’s start with the hardware. It arrived in a box with instructions manual, lanyard, belt clip, micro-USB charger and headset. I also ordered one with USB programming cable. First impression - it is really tiny, but still comfortable to work with. It doesn’t have analog volume control, only digital one from menu with discrete steps. On one hand, I would have preferred classic analog one to have a finer control, but on the other hand this one can be actually locked, so you wouldn’t change the volume accidentally by brushing against your jacket. Micro USB charging port has a disadvantage that there is no “docking station” to charge the radio in and it doesn’t look cool when charging. On the other hand, you can use any cellphone charger with micro-USB. One thing that is more of a concern is the headset connector. Most walkie-talkies I have seen are using two jacks. One for headphones, other for mic. This radio has one 4 pin 3,5mm jack under the cover that makes you think that there are supposed to be two. Main disadvantage - harder to find accessories, but not a big issue - you can get some, but you will have less choice. Battery should be replaceable although it’s not bunch of AAA batteries. That has disadvantage that you can’t buy those in any supermarket, but has the advantage that the radios comes with rechargeable batteries included. 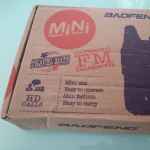 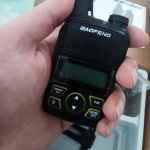 Now lets talk about how it operates and works. First thing you will notice when you turn it on is annoyingly loud voice reading everything and loud beeps. On top of that, their volume doesn’t respond to the volume settings. Fortunately both can be turned off. Other issue I run into quite shortly afterwards is SOS functionality. There is a predefined emergency channel and whenever there is transmission on it, your radio will receive it and make it heard out loud. At my home, somebody was already transmitting on that frequency, just too far away, so I couldn’t figure out the words, but I heard random noise quite often and saw SOS on display. This is harder to get rid off and I used a serial cable to solve this issue. Which brings me to programming radios. There is an open source tool that can do that called Chirp. It works, it’s open source and cross platform. Downside is Python 2, but in the end I got it running. You connect the USB cable to your radio and PC, run the software and download configuration from the radio. It downloads not only the 20 channels, but also other settings - like active channel, beeps and voice settings, 0.5W limiter and the frequency of FM radio receiver (pretty lousy reception when I tested it). You can then edit anything you want, fill the 20 channels and delete emergency and relay channels. You can see the defaults my radio came with on the picture bellow. Awesome functionality of Chirp is that it actually has a built-in list of EU frequencies, so I just opened that one up and copied PMR frequencies to my channels list. Then I set some of them with DCS codes and CTCSS tones to filter out other traffic. When you are done, you upload the final set of settings to the radio (including beeping and reading voice). And you can easily plug in the other radio and upload exactly the same settings. Great to setup same codes on multiple radios on same channels so you would hear just each other. 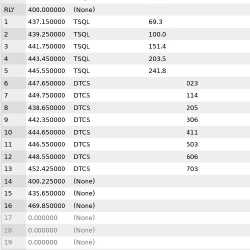 Now for the practical experience, I have them about a week. I’ve been able to do some simple range test and from within my apartment, I was able to have a decent conversation at about 500 meters distance. This was within the city, so some building in the way and no direct line of sight. During the summer I plan to give it a try on longer distances outside of the city limits with less obstacles in the way. But in general, I’m happy with the range and with how it works, after disabling the beeping and voice.